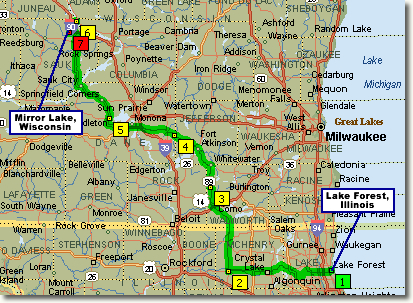 Day 4 began with me leaving Lake Forest and heading up to Wisconsin. Wisconsin, as close as it was, might as well have been another world; everything in our world centered on Chicago, not points north. I’d avoid the interstates and stick to the smaller, more scenic roads. This one took me to the deliciously tacky Wisconsin Dells, where I hoped to spend the afternoon being silly, then head off to find a campground.

On the way there, I passed André’s Steak House (“Never a Bum Steer!”); a place that sold minnows, and nothing but minnows; L’il Richard’s Bar (“Polka Fest This Saturday!”); End of the Line Caboose Motel; Popeye’s Cocktails and Casual Dining (“Homemade Apple Pie, World’s Best”); and a decidedly surreal sign on the side of a country road that read, “Airplane Crossing Ahead, Watch Out for Low Flying Planes”—with no airfield anywhere in evidence. I wondered if I had started hallucinating.

Then there was the string of little country houses along the side of the road that had little shops and delis in them. One had a giant soft-serve ice cream cone on top of the house that had been tied down by guy wires and was so utterly eroded of paint that one could barely tell that it was indeed an ice cream cone. But they did have deli inside. The place was called the Let’s Eat-Mor.

of Cambridge, Wisconsin, population 844, was iconically pretty. Quaint shops, family restaurants, quiet little houses with quiet little lawns, and in the middle of the town, The Village Sweat Shop. Note that it was a sweat shop, not a sweet shop. Just down the road, in the middle of a cornfield, was the Thompson Correctional Center; perhaps newly released ex-cons found work at the Sweat Shop. And further on a bit was Steve’s Taxidermy, with a sign that listed all the different animals they work on, and a stuffed and mounted bear, its arms outstretched, affixed to what looked like either a scarecrow’s pole-and-crossbar or a crucifix; both associations were disturbing in different ways.

Then there were the mom-and-pop pubs: Katie and Porky’s Liberty Corner Tavern, and Hamm’s—Archie and Em’s. (I couldn’t tell if Hamm is their last name, or if they sold Hamm’s Beer.) Archie and Em’s place was a barn-like structure that had all these birds sitting stone still on the slant of the roof, rather than on the peak or on the power line next to it, as birds usually would. I wasn’t even sure at first that they were indeed birds because it seemed so odd and they weren’t moving, until two of them fluttered to the ground like leaves; the rest remained frozen.

Sauk City. I exclaimed into my tape recorder, “Horrible little cramped town! Oh, it so ugly! Oh, what a hideous little place!” The only redeeming feature was Husband’s Dog House, which had all these iron sculptures in the yard. One was a sculpture of a heart that looked like it had become a Dr. Seuss caricature with a long neck and a curlicue tail and a funny little head.

At last I come to

Baraboo, home of Circus World and Ringlingville. The plethora of circus memorabilia befitting its rich circus history is interesting, though the museum is in the worst part of the decaying old town. On the grounds of Circus World are all these trolleys and circus carts. A sign read, “Camel Barn: This brick structure complex housed the Ringling Brothers’ Circus lead stock of camels, zebras, and llamas. The brothers were famous for their large teams of harnessed camels pulling the circus wagons in street parades.” (On the tape, I somehow substituted the word “cannibals” for “camels.”)

I expected more from Wisconsin Dells, frankly. It’s a tourist Mecca—ugly, tacky, and expensive—but when I arrived there it was off-season, so the place was deserted. I went to two “attractions,” if you can call them that: Tommy Bartlett’s Robot World (Bartlett is the late billionaire who essentially built the Dells) and The Wonder Spot, where the laws of gravity have apparently gone haywire. Both were a waste of time and money, without even the cheesy fun that I hoped I’d find.

So I went camping.

For the record, I believe a deer led me to Mirror Lake. There were several whitetails standing at different intersections, pointing me first up one road, then down the next. First one, then a second. Then a third came bounding toward me, and stopped next to a sign that read Mirror Lake State Park.

When I drove into the campground area, a fourth deer suddenly bounded into the dirt road in front of me, walked into one particular campground, waited for me to catch up and park, then disappeared into the trees.

I put up my tent ten feet from my car, inflated my air mattress, and cooked a dinner of steak and asparagus. Lovely to be camping, even if it’s not really in the wilds. I had a battery-operated TV and radio, but couldn’t get any reception (in a month of camping, I believe I was able to get reception only once or twice; being cut off from my usual distractions was a very good thing). It was chilly, and comfortable, and I was very happy and content. I was in bed by 9:30.

In the morning, as I left the park, three more whitetail deer stood grazing just beyond the park boundary, on the shoulder of the road. I was convinced they were saying goodbye to me.

Folks, I'm pleased to announce that Notes from the Dreamtime has been accepted as one of the blogs on Shaman Portal! They have a lot of nice features, including international news about shamans and shamanism, articles, videos, and a Talking Stick Forum. Please check them out!
Blog Networks