The Hindu god Shiva (who has nothing whatsoever to do with sitting shiva) is usually depicted as one of the members of the great Triad, one of the three projections of the Supreme Reality, each with a specific cosmic function. Brahmā is the Creator, Vishnu is the Maintainer or Preserver, and Shiva is the Destroyer or Transformer, the dissolution that precedes re-creation. In Shaivism, the oldest of the four sects of Hinduism, Shiva is the supreme Being: creator, preserver, destroyer, revealer, and concealer of everything that exists.

I first encountered Shiva in Joseph Campbell and the Power of Myth, the series of interviews with Bill Moyers on PBS in 1988. He did a marvelous job of explicating the iconic image of Shiva Nataraja (Shiva, Lord of the Dance), right. Shiva does the cosmic Dance of Bliss inside a ring of fire—the world of illusion—to destroy a weary universe and make preparations for Brahma to create everything anew.

He has four arms and two legs, and every aspect of his pose is a carefully constructed symbol. Dr. Richard Stromer explains it beautifully:

The contents of the upper two of Nataraja’s outstretched hands are meant to demonstrate the eternal balance between the forces of creation and those of destruction. In the upper right hand, Shiva holds the sacred damaru, a drum in the shape of an hourglass, with which Shiva beats out the rhythm of his dance and with it the ceaseless creation of the universe and all of its infinite forms. This drum, writes Joseph Campbell, “is the drum of time, the tick of time which shuts out the knowledge of eternity,” as a result of which “we are enclosed in time.” Moreover, it is said to signify the primordial sound from which all things emanate, connoting in Heinrich Zimmer’s words “Sound, the vehicle of speech, the conveyer of revelation, tradition, incantation, magic, and divine truth.” Opposed to this force of creation as represented by the drum is the flame of extinction held in Shiva’s upper right hand. That flame symbolizes all of Shiva’s awesome powers of destruction, the terrible but necessary burning away of all things existing in time and space, the fire which, Campbell writes, “burns away the veil of time and opens our minds to eternity.” END_OF_DOCUMENT_TOKEN_TO_BE_REPLACED

No one would mistake the Stone Age ivory carving for a Venus de Milo. The voluptuous woman depicted is, to say the least, earthier, with huge, projecting breasts and sexually explicit genitalia.

Side and front views of the Venus of Hohle Fels

Nicholas J. Conard, an archaeologist at the University of Tübingen in Germany, who found the small carving in a cave last year, says it is at least 35,000 years old, “one of the oldest known examples of figurative art” in the world. It is about 5,000 years older than some other so-called Venus artifacts made by early populations of Homo sapiens in Europe.

Another archaeologist, Paul Mellars of the University of Cambridge in England, agrees and goes on to remark on the obvious. By modern standards, he says, the figurine’s blatant sexuality “could be seen as bordering on the pornographic.” END_OF_DOCUMENT_TOKEN_TO_BE_REPLACED

I am beyond honored. I am verklempt. I am . . . wow, that thing is really gaudy, isn’t it? . . . At any rate, my writing experiment from last year, September Songs, was just named as one of five recipients of the prestigious Arte y Pico Award bestowed by Indigo Bunting, the genius behind Route 153. (I am not contractually obligated to use the word “prestigious” every time I mention the prestigious Arte y Pico Award, but I think it adds so much to the name, don’t you?)

Admittedly, this blog was alive for only one month: September 2007. When Sewa Yoleme joined the Dancing About Architecture project—a song a day project—he committed for exactly thirty days. And what a thirty days it was. This blog is like walking into a classroom of musical history and culture.

END_OF_DOCUMENT_TOKEN_TO_BE_REPLACED

I Scream, You Scream

While I’m off deciding on seven questions to ask my first willing interview victims Bev and Deloney, I thought you might be entertained by this malodorous little news item. I don’t suppose any of you have Dr. Freud on speed dial, do you?

considered one of the more influential contemporary artists, had an installation at the Paul Klee Centre in Berne, Switzerland, called Complex Shit. It was an inflatable dog turd the size of a house, and it was installed in the museum’s front garden, the Art Playground.

The night of July 31 was especially windy, and alas, the turd escaped its moorings and was carried 200 yards, bringing down a power line and smashing into a greenhouse and breaking some windows before falling back to earth at a children’s home. END_OF_DOCUMENT_TOKEN_TO_BE_REPLACED

Writers of art history have long kept different cultures on separate shelves, but the modern world has shown how they relate to one another. Julian Bell on why he has gone global with his Mirror of the World: A New History of Art

These two heads belong to traditions as far separated as any in world history. The stone carving is from ancient Mexico and the pen drawing from Renaissance Germany. Mexico was first peopled a good 15,000 years ago by migrations that entered the Americas from Siberia. There is scant evidence for any later contact between the civilisations that grew up there and those that grew up in Europe, Asia and Africa.

The stone head, carved by a Totonac living on Mexico’s Gulf Coast, draws on shamanic thinking. Shamans can transmute from human to animal because they can reach back and tap the primal stuff of which everything is composed. For other mortals, such categories are fixed: but to gain wisdom is to understand that all opposites derive from unity. As cities and priesthoods developed in Mexico, an emblem for these doctrines was developed. From around 650 BCE, we start to encounter the image of a fleshly face that morphs into a grinning bare skull: the right side and the left side of Ometeotl, the “lord of duality.” END_OF_DOCUMENT_TOKEN_TO_BE_REPLACED

My friend Kate lived for several years in Yuma, Arizona, and worked as an environmental lawyer on an Army base. She and her fiancé Ken made numerous trips down the Mexican coast visiting the tiny towns along the Gulf of California. One particular family befriended them, and welcomed them into their home repeatedly.

The years have been difficult. Ken died in a horrific accident, leaving Kate in great mourning. Then the Mexican family’s matriarch died, leaving behind a sad but kindly husband and two young kids. 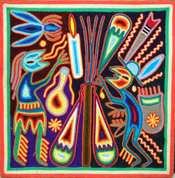 But though Kate moved back to the D.C. area, she makes regular visits to the family in Mexico, and always brings interesting gifts for the kids (who are growing like weeds; it makes Kate feel very old).

Every year she sends me some memento from Mexico, most of them pieces of Huichol art. She has given me two blankets woven in the most amazing colors, a decidedly hallucinogenic wooden dog, and two intriguing crucifixes (blending several different religious traditions).

Perhaps the most recognizable type of Huichol art is the nieli’ka, or yarn painting (like the one depicted here). In traditional Huichol communities, nieli’kas are important ritual artifacts. They’re usually small square or round tablets covered on one or both sides with a mixture of beeswax and pine resin into which threads of yarn are pressed. Nieli’kas are found in most Huichol sacred places such as house shrines (xiriki), temples, springs, and caves. END_OF_DOCUMENT_TOKEN_TO_BE_REPLACED

Folks, I'm pleased to announce that Notes from the Dreamtime has been accepted as one of the blogs on Shaman Portal! They have a lot of nice features, including international news about shamans and shamanism, articles, videos, and a Talking Stick Forum. Please check them out!
Blog Networks