A couple of weeks ago, Adamus told me he had gotten a dog at the pound, a Lab mix named Dusty. He said I should definitely meet her. 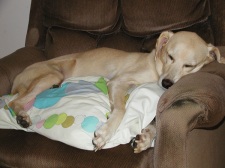 Cool with me, I adore dogs.

Yesterday he brought her over. I gasped when she walked through the front door. It was my Goldie (that’s her in the picture).

OK, I can cope with outward similarities and chalk it up to the breed, though Lab-Whippet mixes are surely not too common.

But when she got in, she immediately jumped up and started kissing me insistently on the mouth. Then she stopped and rolled at my feet, the way Goldie did. Then, when I was sitting down, she stood and put her paws on my shoulders and kept staring into my eyes, then nuzzled me and kissed me more. As if to say, “You remember me, don’t you?”

So many other behaviors. The way she moved around the dining room table in a particular way. The way when she met Mom, she immediately rolled her head and shoulders into her lap the way Goldie used to do. The way she kept going to the kitchen and standing at the place where we used to keep her food and water bowls.

Adamus is a Buddhist at heart. I asked him about reincarnation. He said, “I knew that when I had her home less than one day, never even having met Goldie [italics mine]. I think it was her looking at me knowingly as though she had not met me but knew me.”

When I asked how he sensed it, he said, “My constant tripping over the name Dusty and mistakenly using ‘Goldie.’ And a persistent feeling this was the dog to bring home for more than just her being a good dog. She was not just the right dog. She was/is THE dog. And then I had to bring her to see you today. HAD to. I wanted to but Lee [his wife] insisted I HAD to.”

Later I asked Mom if Dusty “seemed familiar.” She’s a die-hard traditionalist, no woo-woo Eastern beliefs for her. She said, “That was Goldie, wasn’t it? I just wanted to keep her, to send him home without her. I know it was wrong of me. It was just so wonderful having her back.”

So that’s been my weekend.